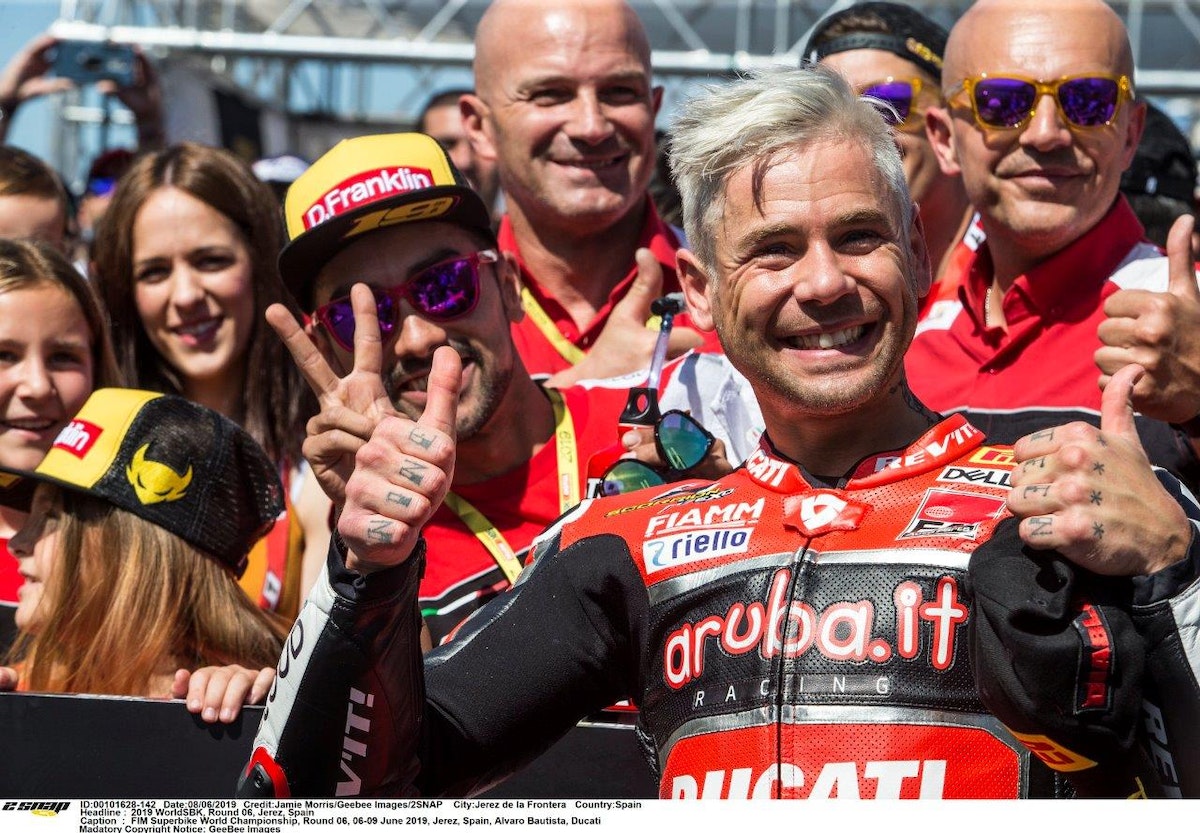 In what was a thrilling race two at Jerez, an uncharacteristic error from Alvaro Bautista (ARUBA.IT Racing – Ducati) at the start of lap two saw the Spaniard suffer his first racing crash in WorldSBK. The battle for the win came alive as Jonathan Rea (Kawasaki Racing Team WorldSBK)and Michael van der Mark (Pata Yamaha WorldSBK Team) went head-to-head in the Spanish sun, resulting in the Dutchman taking his first win of 2019, whilst Razgatlioglu romped to third and yet another podium.

Into turn one on the opening lap, Marco Melandri (GRT Yamaha WorldSBK) took the initial advantage, whilst a disaster for his fellow Yamaha rider Alex Lowes (Pata Yamaha WorldSBK Team), who crashed at turn two on the opening lap. Bautista took the lead at turn five and Michael van der Mark followed him through as Melandri went wide. Jonathan Rea took the pair of Yamaha riders at turn six, in a bid to pursue Bautista at the front.

However, it was disaster for the Spaniard at the beginning of lap two as he crashed out of the lead! The championship leader hit the tarmac at turn one, with his ARUBA.IT Racing – Ducati tumbling through the gravel. Bautista remounted but retired soon after. The race was now on, as Jonathan Rea led van der Mark and Marco Melandri, ahead of Toprak Razgatlioglu and Chaz Davies (ARUBA.IT Racing – Ducati) completing the top five.

With 15 laps to go, the top five were covered by a second but disaster struck again, this time at turn five, as Marco Melandri attempted an ambitious pass on Davies, resulting in both riders crashing out. Davies was clearly frustrated with his former teammate, as both of them lost the chance to achieve a good result with Bautista out. Three of the main protagonists had suffered terrible results – Jonathan Rea was now looking like he was going to walk away from Jerez with a strong haul of points. 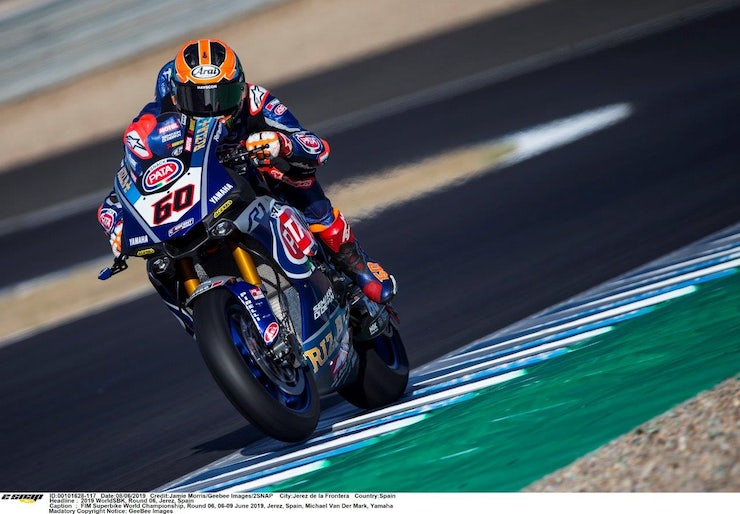 Michael van der Mark wasn’t prepared to let Rea have it all his own way, as the Dutchman took the lead with 14 laps to go at turn six. Jonathan Rea initially stayed with the Yamaha of van der Mark but couldn’t keep with the relentless pace of the 26-year-old out front, as 10 laps later, he had pulled out a two second lead. Alvaro Bautista had re-joined and was circulating in 16th position, ready to pick up the pieces in case anyone else was to crash out.

Battles continued to develop down the field, as Michael Ruben Rinaldi (BARNI Racing Team), who rocketed through from 11th on the grid to be the top running Ducati in fourth position, ahead of a jostling Sandro Cortese (GRT Yamaha WorldSBK) and Leon Haslam (Kawasaki Racing Team WorldSBK), with the Brit getting ahead of the German in the closing stages at turn one.

A crash for Ryuichi Kiyonari (Moriwaki Althea Honda Team) at the fast turn 11 resulted in gravel being put all over the circuit and a red flag coming out with two laps to go. Kiyonari walked away from the crash, although his bike was not so fortunate, having barrel rolled.

Michael van der Mark was a winner once again completing a faultless weekend, right the way through from FP1 to race two. Second position and closing the gap down to Bautista in the championship to 41 points, Jonathan Rea was happy to be back on the podium. It was another stunning ride from Toprak Razgatlioglu to complete the race in third position. Rinaldi took a career-best fourth, whilst Leon Haslam fought hard to complete the top five.

"My plan today was to fight with Alvaro Bautista, but unfortunately he crashed, and I hope he is ok. After that, it was Johnny and me, and I was following him trying to pull away from Toprak, but his pace wasn't as fast as I expected, so I passed him and just tried to do my rhythm. The bike felt so much better today compared to yesterday. Big thanks to the team because this weekend they did an incredible job and from Friday morning I was feeling comfortable on the bike. I am proud of my first win of the season".

"That was a real podium for us today. We made the bike better compared to yesterday, so I had to thank my team. I had a little bit more front end feeling, but Michael's pace was incredible, and even with the heat, he made the same race pace as the race winner yesterday. It was a very tough weekend from all aspects, but we had to consolidate it today, and we got some points back in the championship. Now we move on to Misano where we had a strong test last week, but the biggest thing is thanks to my team for all the confidence this weekend and making the bike step by step better".

“Today we have both sides of the feeling! We have a good feeling because we won the Tissot Superpole Race but in Race 2, I crash in the second lap; I didn’t make a mistake or anything, I just lose the front end of the bike and crash. Fortunately, I am physically OK.”

The WorldSBK Tissot Superpole Race saw another spectacular performance by Alvaro Bautista (ARUBA.IT Racing – Ducati), who breezed to his 13th win in his rookie season. The Spaniard took his home win with a comfortable margin but there were plenty of battles behind the runaway rookie.

Into turn one for the first time off the line and Bautista took the lead, with Marco Melandri (GRT Yamaha WorldSBK) second and Leon Haslam (Kawasaki Racing Team WorldSBK), who made it into third position. Tom Sykes (BMW Motorrad WorldSBK Team) was in fourth, with Alex Lowes (Pata Yamaha WorldSBK Team) and his teammate Michael van der Mark). After lap one, starting from 19th on the grid, Jonathan Rea (Kawasaki Racing Team WorldSBK) was up to 10th, with Chaz Davies (ARUBA.IT Racing – Ducati) in his sights.

With the race settling down into a rhythm, Bautista wasn’t pulling away as fast as he did in race one on Saturday, as Marco Melandri pulled clear of Leon Haslam in third place and looked to be trying to go with the Spaniard at the head of the field. Michael van der Mark was trying his hardest to make passes but was losing control, as he missed apexes and ran wide when trying to make moves.

Bautista led Melandri at the front of the field, whilst Leon Haslam was third and looking strong ahead of Sykes. But it was disaster for Alex Lowes, who crashed out in dramatic fashion at turn seven, resulting in his first back-to-back pointless race since Portimao race one and two in 2017. Lowes was OK but a return to Jerez is rapidly turning into a weekend to forget for the Brno race winner from 2018.

Michael van der Mark was a man on a charge as he passed Haslam at turn six on lap five, before then catching Melandri and passing the Italian at the same corner two laps later. A strong end to the race for Jonathan Rea and Tom Sykes saw the Brits pass their fellow countryman Haslam in the closing stages too, remaining in that order until the chequered flag.

Bautista took his 13th win of the season, meaning he will start on pole ahead of van der Mark and Melandri in race two. The second row will see Jonathan Rea start from fourth, ahead of former teammate Tom Sykes and current teammate Leon Haslam. Rea finishing fourth signifies the first time since Jerez in 2015 that the northern Irishman has finished two races consecutively off the podium. 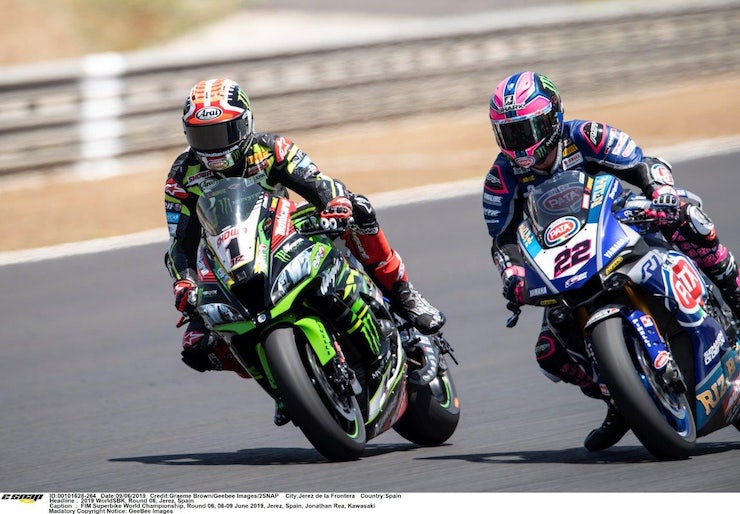 UPDATE: Jonathan Rea has been handed penalties following his collision with Alex Lowes on the final lap, meaning he doesn’t feature on the podium.

On the opening lap, it was a frantic start as Jonathan Rea (Kawasaki Racing Team WorldSBK) took the holeshot and kept his advantage, despite Alex Bautista (Ducati) trying to get around the outside. However, on the short burst between turn four and five, the Spaniard was able to get ahead of Rea with a well-executed move. At the end of the first lap, Alex Lowes (Pata Yamaha WorldSBK Team) was a solid third, whilst teammate Michael van der Mark had fought his way ahead of Marco Melandri (GRT Yamaha WorldSBK) and was fourth.

As the battle for third emerged, Michael van der Mark sat on the tail of Lowes at the beginning of lap three. Half way round the lap however, it was an unconventional pass at turn three that saw the Dutchman get ahead of his teammate and lead the pursuit to Jonathan Rea, who was losing time to Bautista.

It wasn’t long before the Yamahas began to rapidly close down the reigning four-time WorldSBK Champion. The Northern Irishman had no answer for a rampant Van der Mark, who passed him with ease at turn six with 12 laps to go. Soon, it was Alex Lowes’ turn to get ahead of Rea, this time at turn two as Rea made a rare mistake. However, Lowes made a similar mistake at turn five, allowing Rea to go back ahead at turn six before a battle throughout the rest of the race ensued.

There were further battles down the field, with Toprak Razgatlioglu (Turkish Puccetti Racing) making a blazing start to the race, up to fifth from 11th. Despite this, Marco Melandri was making his presence felt, with a strong block pass at turn six in the middle of the race, whilst Razgatlioglu got the Italian back a lap later at turn one. The battle raged for the rest of the race, with Melandri taking his top five in the end since he was third in race one at Phillip Island.

With van der Mark clearing off and Bautista on the horizon, Rea and Lowes were left to battle till race end.  With multiple clean passes as the two swapped positions, the last lap was the perfect opportunity for a desperate move from Rea, who needs as many damage limitation points as possible. With Bautista winning and van der Mark second, there were shenanigans behind as 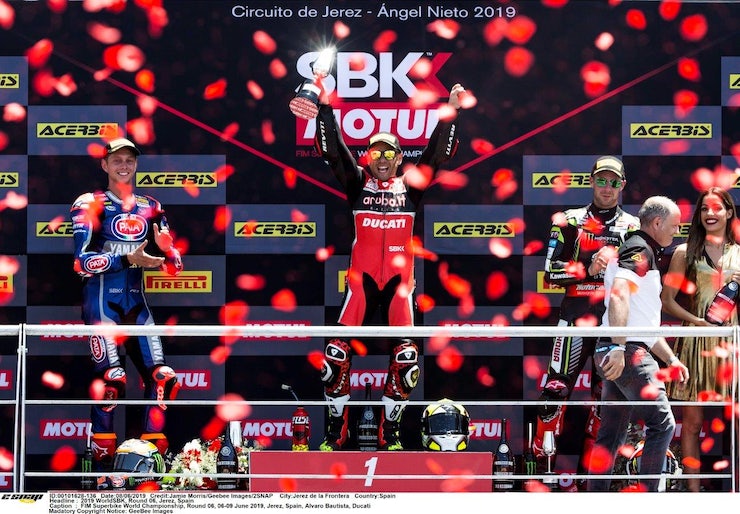